It’s all fun and games until someone, well, takes away the fun and games. Yes, even the best browser games can be a time-suck sometimes.

But while putting this list together, I read some quotes that made me think about the benefits of browser games (and games in general). Even ones that seem pointless.

By playing games you can artificially speed up your learning curve to develop the right kind of thought processes.
Nate Silver, American statistician and writer

Games give you a chance to excel, and if you’re playing in good company you don’t even mind if you lose because you had the enjoyment of the company during the course of the game.
Gary Gygax, American game designer and author

In this list of best browser games you’ll find fun for everyone, from classic reboots to fresh new titles.

Jump to a section!

What are the best browser games?

Scroll down to find out!

As a young wizard, you traverse the worlds of Prodigy battling creatures and bosses! (To win, you must answer sets of questions that adapt to your math level.) With every battle your wizard moves closer and closer to finding the long-lost keystones that will unlock the mysterious Academy.

Remember playing Snake on the indestructible Nokia phone? In this version you’re not just a neon snake -- you’re competing with other neon snakes for supremacy.

Beam across the field to eat the cubes that appear when another snake dies and grow longer. But don’t run into other snakes or else you’ll turn into cubes and have to respawn in your original size.

If you want to gain speed, slither alongside other neon snakes. This causes electrical impulses that give you speed which you can use to force other snakes to slither into you! 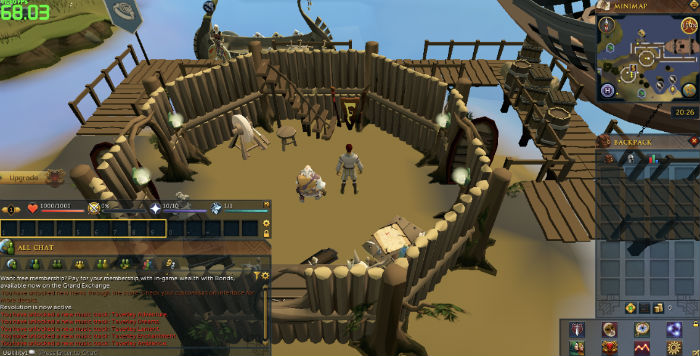 In January 2001, developer Jagex released RuneScape, a point-and-click MMORPG set in the vast, medieval fantasy realm of Gielinor. Take part in over 200 quests while you explore a world filled with diverse races and guilds all seeking power.

You can choose the types of skills you want to train in: Combat, Artisan, Gathering, Support and Elite. As you level up, your skills will become more advanced which will ultimately help you complete your quests.

Simply use your arrow keys to steer and you’re off to the races! NoBrakes.io is a multiplayer racing game where you reach checkpoints to gain a competitive advantage with power-ups that boost your speed or slow others down.

Sounds simple, right? Yes, until you realize this race isn’t a conventional one. If you’re near the front of a line, for example, checkpoints can pop up behind you. So you need to be ready for anything! 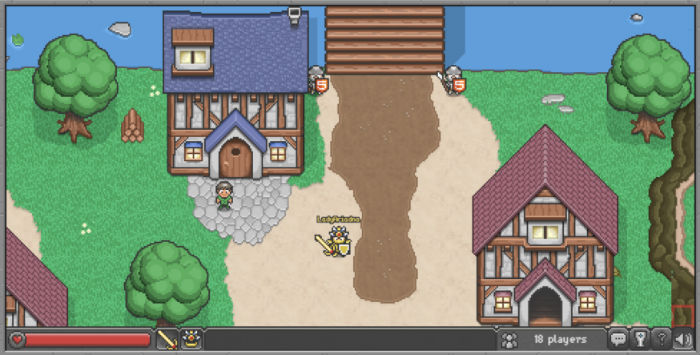 This browser game invites you to explore a digital world from your -- you guessed it -- browser. Step into the shoes of a young warrior in search of friends, adventure and treasure.

Whether you defeat enemies alone or as a party is up to you. But don’t forget to collect the loot when you do!It will take you far in BrowserQuest. 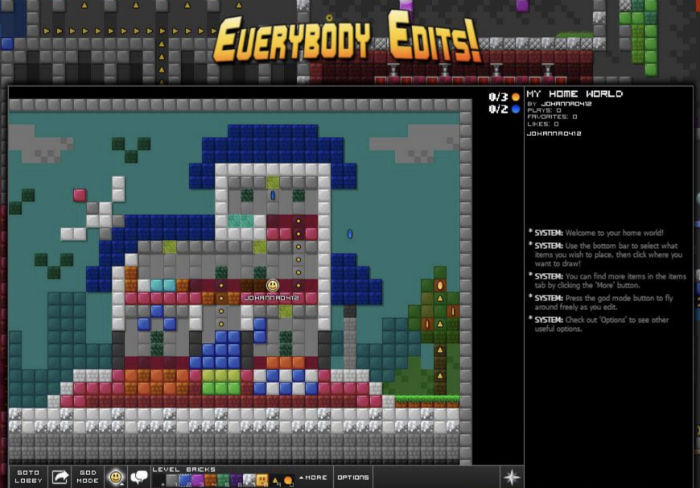 Entrepreneur and developer Chris Benjaminsen created this real-time, multiplayer platform game. But the players are the ones who can build levels for others to try and complete.

Although you don’t compete directly with other players, they’re in-game creations can still indirectly affect you.

Since “everybody edits,” this unique browser game gives players two choices: 1) play the game or 2) play with the game. 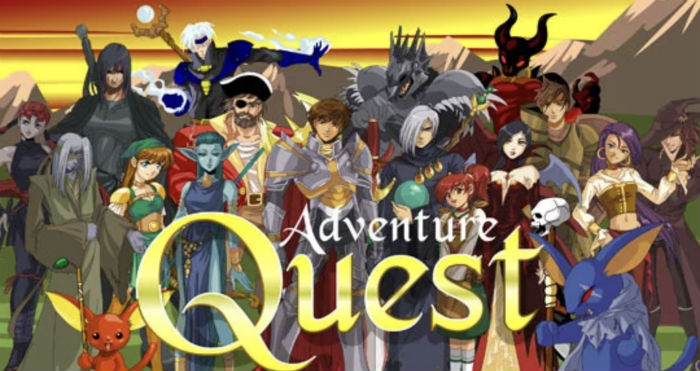 AdventureQuest is a single-player RPG wherein you create a character, pick a class, and fight against hordes of monsters. Depending on your personality, you can choose to be a ninja, wizard, fighter, rogue, or paladin (to name just a few).

The AdventureQuest world is filled with magical powers, hundreds of items and over 700 monsters. Take part in dozens of quests! The more you win, the stronger your character gets and the more you progress. 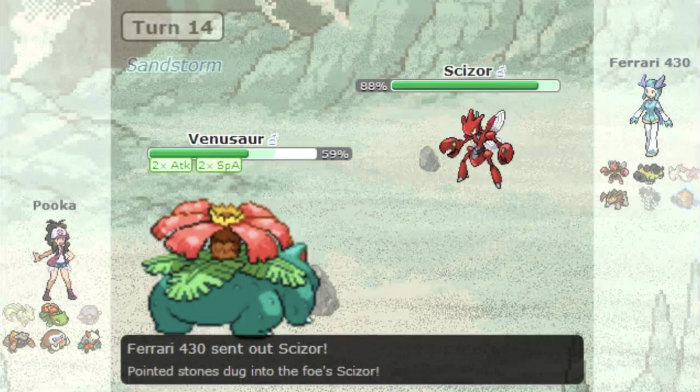 Children and grown-ups alike love this online battle simulator. It’s like playing the Pokémon video games without having to put in the work. No waiting to rest or level up -- you just jump straight into battle.

You can build a custom team if you have a preference for the Pokémon you want to use, or you can join a random one and battle with whatever you get. Instead of the goal to “catch ‘em all,” now you can beat ‘em all! 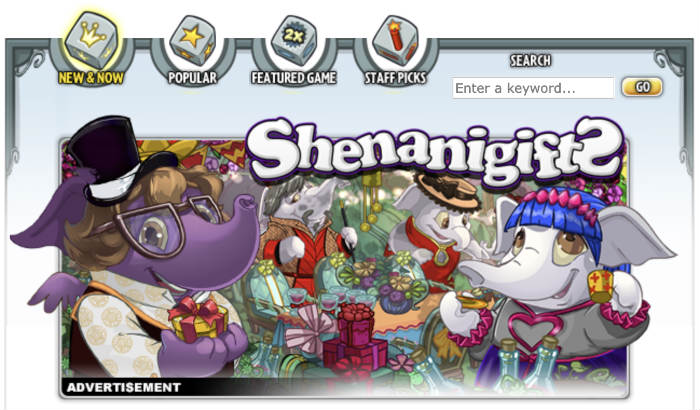 In November 1999, game designers Adam and Donna Powell released arguably one of the best browser games: Neopets. Neopets is a virtual pet website where players can own virtual pets and care for them using neocash.

20 years later, Neopets still exists and is active thanks to its beloved events, dailies, pet customization and community. 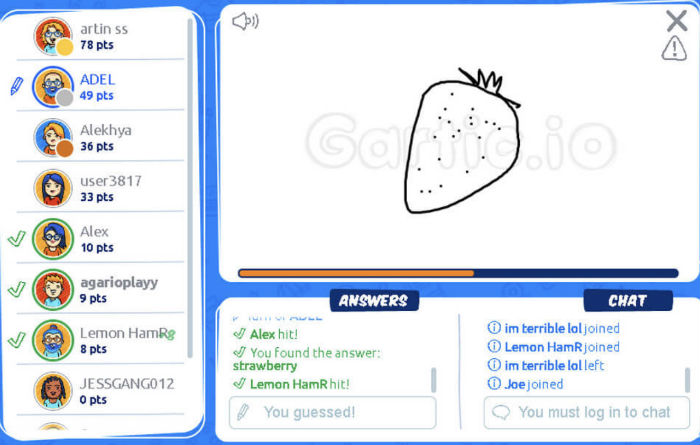 Remember playing pictionary or Draw Something? Similar to those games, you can sum up Gartic.io in three words: draw → guess → win! In this online drawing game, up to 10 people can play.

At the start of every round one person will randomly draw a word and draw it, while everyone else has to try and guess the word correctly. 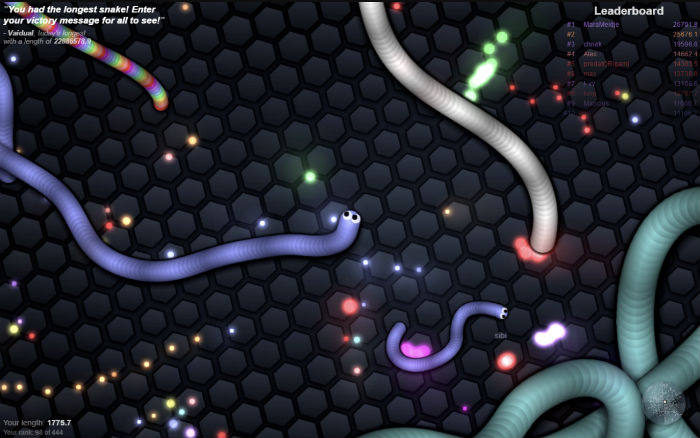 Jump into Slither.io, the new and improved Snake game, with millions of players around the world! As you probably know, the goal is to become the longest snake of the day. All you have to do to grow is get other slitherers to run into your body.

If you end up breaking the record for biggest snake that day, you get to leave a message on the screen for everyone who’s playing to see! 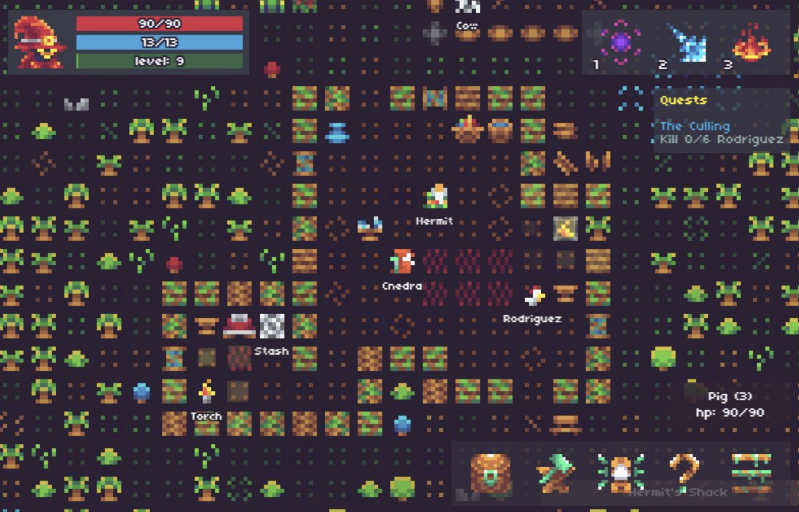 Big Bad Waffle is the game developer behind Isleward, a roguelike MMO that drops you into the city of Strathford. (A “roguelike” is a subgenre of role-playing video game characterized by a dungeon crawl.)

Strathford is where you can form a party of your own, learn how to level up and explore different islands. Together or alone, you’ll find yourself doing dungeon crawls in search of loot. 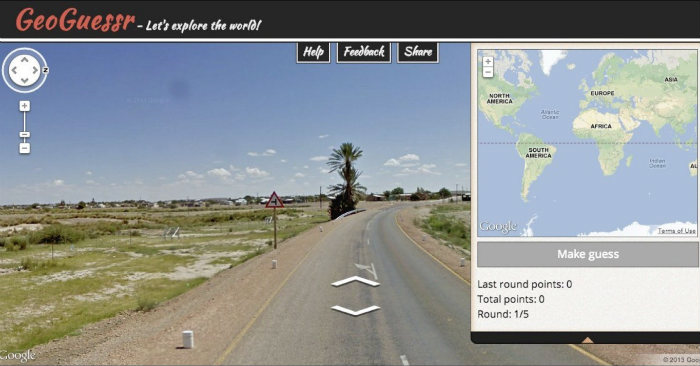 Take a trip around the world, visiting faraway places with GeoGuessr. In this geographic browser game, you’re placed in a semi-random location and must discover where you are in the world. But you can only use visible “street view” clues to inform your guesses!

When ready to guess, you place a location marker on a map. Based on the accuracy of your guess, GeoGuessr will give you points on a scale from zero (direct opposite of where you actually are) to 5000 (within 150 meters of your actual location). 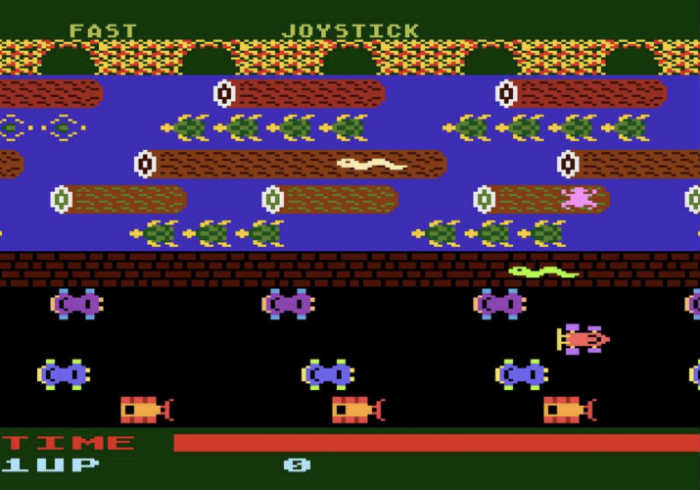 This classic arcade game goes back to 1981. Playing as the frog, your goal is to get from one side of the road and river to another -- all while cars, trucks, logs, turtles and other obstructions move horizontally across the screen.

Depending on your settings, a level can start with three, five or seven lives (or, in this case, frogs). Want to progress? Successfully get all the frogs across safely to their homes. 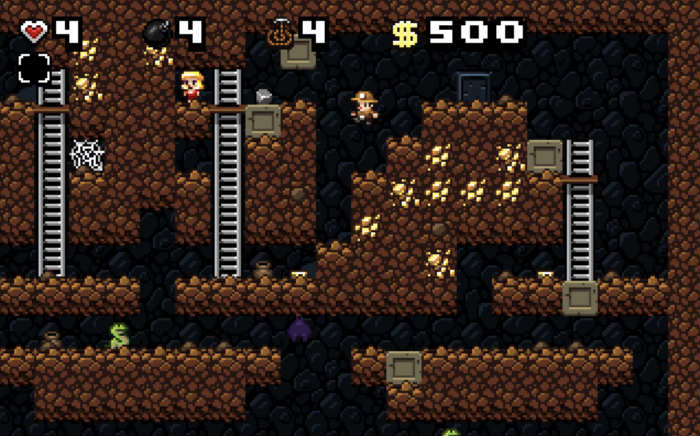 Legends speak of a Colossal Cave that extends deep underground, so twisted by time that its passages shift like the sand under which it lies… The Cave is said to be filled with fabulous treasures, but also incredible danger! 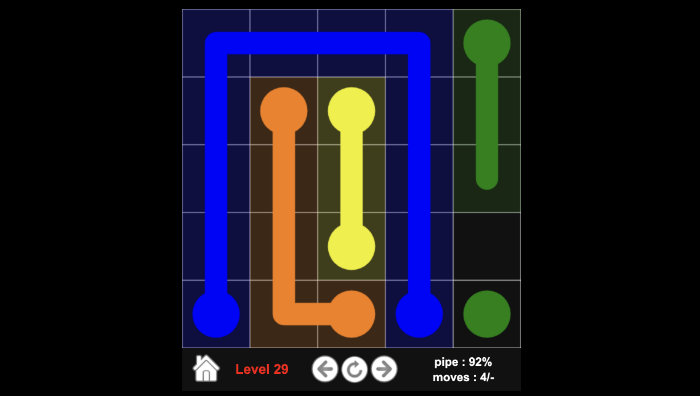 This online puzzle game challenges players in a different way! Your goal is to connect matching colors using a pipe to fill the entire board. But don’t let your pipes overlap, or else they’ll break!

There are thousands of free levels available and 10 different board sizes. Flow Colors also offers different gameplay modes depending on your mood -- you can play to relax or race against the clock. 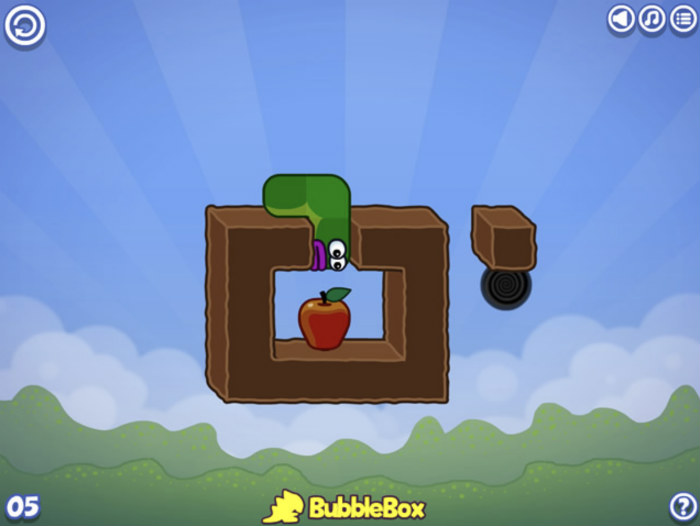 If you think Flappy Bird was frustrating, you’ve got to try Apple Worm. The goal is to get your worm to eat the apples and reach the portals without getting stuck in the obstacles or falling off the level.

It sounds simple, but the levels get trickier as you progress. Think you can help the worm eat the apple in all 30 levels? 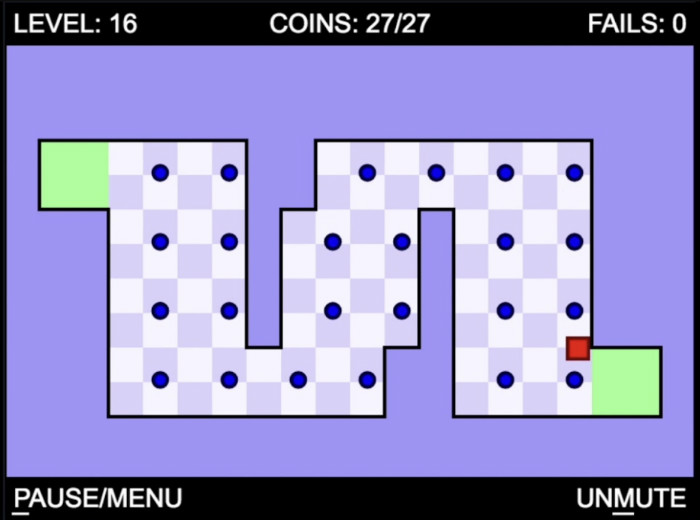 According to game creator Stephen Critoph, “This is The World’s Hardest Game. I guarantee you it is harder than any game you have ever played, or ever will play.”

In this game, you’re a red square that needs to get from point A to point B while collecting yellow circles along the way. With each level you pass (if you can pass them at all) they get harder and harder. 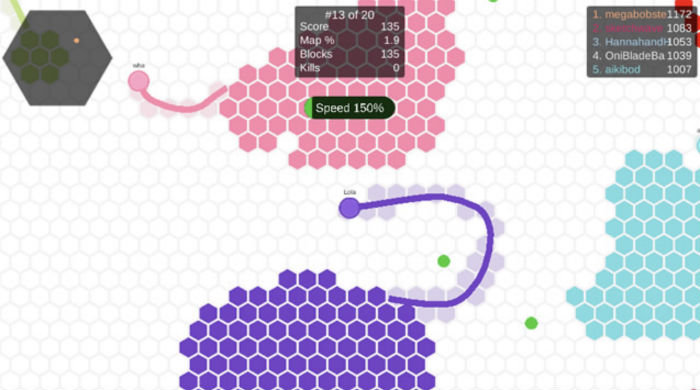 Drawing inspiration from Snake and Slither.io, Hexar.io is a free-for-all multiplayer game. Your mission is to conquer and keep as much hexagonal territory as possible. But others are trying to do the same, so don’t trail too far from your territory or else you might lose it.

You should also avoid hitting your opponent’s head because that can result in having to start expanding all over again -- and there’s only so much map space. Don’t forget to collect green circles to gain speed! 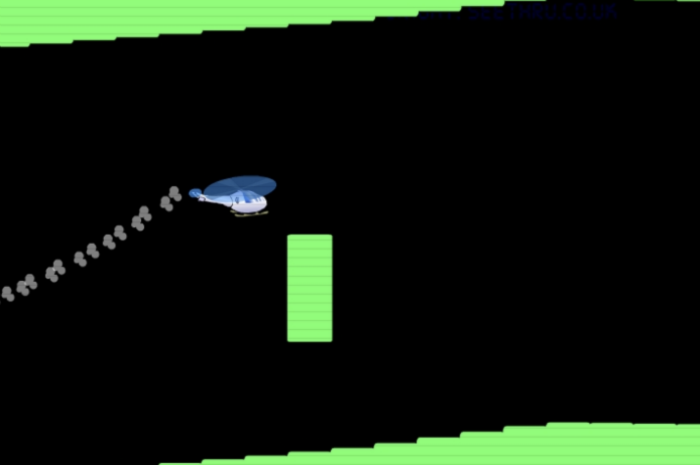 To close, here’s a classic that can end in triumph or fury. The goal of Helicopter Game is to fly your helicopter as far as possible without crashing into the cavern’s floor, ceiling or obstacles.

No matter how far you’ve flown, if you crash you start again -- from the beginning. Do you have the masterful control and patience to fly the farthest? 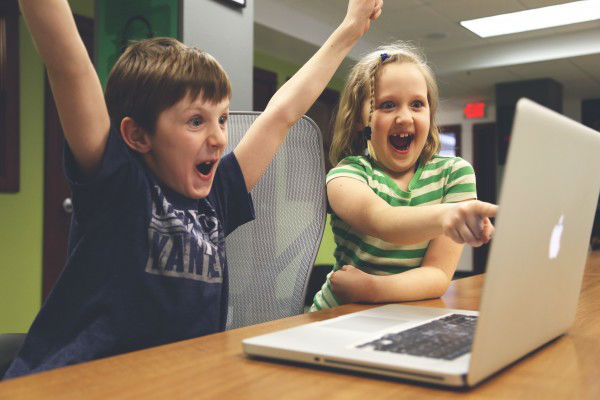 Can playing the best browser games be a time-suck? It depends how much time you spend in front of the computer screen playing.

That said, believe it or not, the list of best browser games you just scrolled through can have some surprising benefits. For example:

Playing browser games isn’t necessarily time well wasted. In fact, they can be beneficial in more ways than one -- and that applies to kids and grown-ups. So what do you say? Let’s play!

Which one of these best browser games do you like most and why? Let us know in the comments below!

Blog posts hand-picked just for you!

👉 Children and Technology: All Your Questions Answered