We use big numbers everyday, whether we’re counting money, weighing objects or planning a trip.A place value chart is an excellent tool for helping students make sense of large numbers. Place value is a foundational math concept, necessary for addition, subtraction, exponents, long division, fractions and almost every other math operation. In this article:

Many learners understand place value best when they work with the numbers themselves. A place value chart gives students the chance to see the value of digits, numbers and decimals in our base ten number system.Here are three charts to use with your students as they learn place value! Plus, we've made it easy for you to choose between colorful and printer-friendly options. 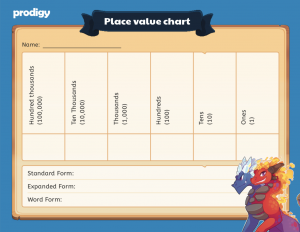 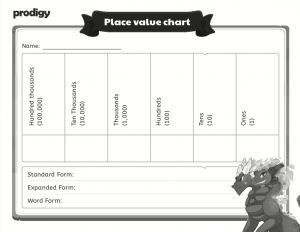 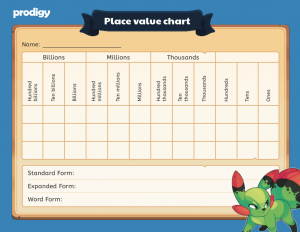 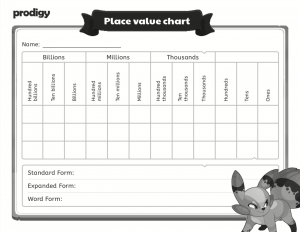 Click to downloadThrill and amaze students when you teach them to make gigantic numbers using a place value chart. This chart also includes spaces for students to write out their answers in standard, expanded and word form. Have students work with famous numbers, like:They’ll learn about science and geography, while also practicing their place value skills! Place value charts also teach students the difference between place value and period value. Place value is the value of an individual digit, while period value refers to groups of three places separated by commas. 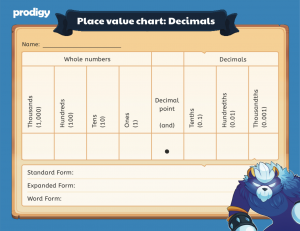 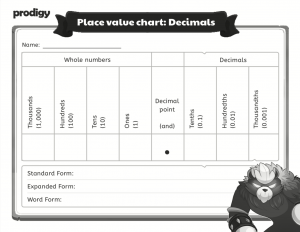 Use Prodigy to teach place value!

Want so much more than just a place value chart? Prodigy is a no-cost, curriculum-aligned math platform that makes learning math fun! Students will explore an exciting world filled with adventure, where success depends on correctly answering skill-building math questions. 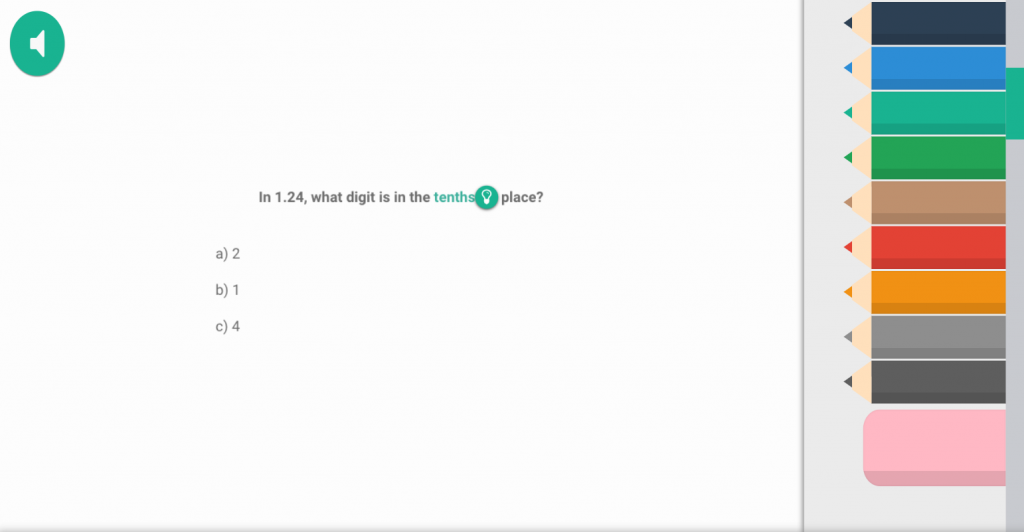 Teachers have access to a powerful dashboard where they can see where students are struggling or excelling and control the questions students receive in-game.Using Prodigy in your classroom promotes a daily math practice and keeps students engaged with in-class content. With more than 1,400 skills across three DOK levels, you’ll be able to align in-game content with anything you’re teaching in the classroom — including place value!Learn more about using Prodigy in your classroom:

What is place value?

Place value is the value of a digit as determined by its position in a number.  Students learn place value to understand that every number is made up of digits. These digits -- 0-9 -- have different values depending on their place in the number. Up until this point, students have been learning numbers as a continuous sequence. They don’t necessarily understand the base ten system or realize numbers are made up of other numbers.

How to teach your students about place value

The best way to start teaching students about place value is through hands-on examples. Using pebbles, beans or other small objects, ask the students to count out 17. Explain to students they can divide 17 into a group of ten and a group of seven. In 17, the one represents the group of ten and the seven represents seven ones.Do this a few more times, with a larger number each time. (For example, move from 17 to 24, then to 43). Use a place value chart to explain that each digit in the tens column represents groups of ten. For example, a four in the tens column would represent 40, which is four groups of ten. This is a good time to start teaching some of the vocabulary around numbers and place value students will need to know.Standard form: The number, written as usual.

Written form: The number written out using words instead of digits.

Expanded form: The number written out as the product of the digit multiplied by the place value.

Expanded form is an excellent way to illustrate place value with students who have already learned the basics of multiplication. With each place further to the left, the value of the digit is multiplied by ten.  Students should also be able to use the less than (<), greater than (>) or equal to (=) signs to express the relationship between two numbers as a sentence:

Do your students struggle with the difference between these signs or with expressing which number is greater? Try these tricks to help them remember: Students can also use a place value chart to compare numbers.Other important symbols include:

≥ Greater than or equal to

≤ Less than or equal to

Instead of multiplying by decimals to expand the decimal place, decimals in expanded form can be more accurately represented when we multiply the digit by the appropriate fraction. Since decimals are numbers less than one, each place value can be represented as a fraction. 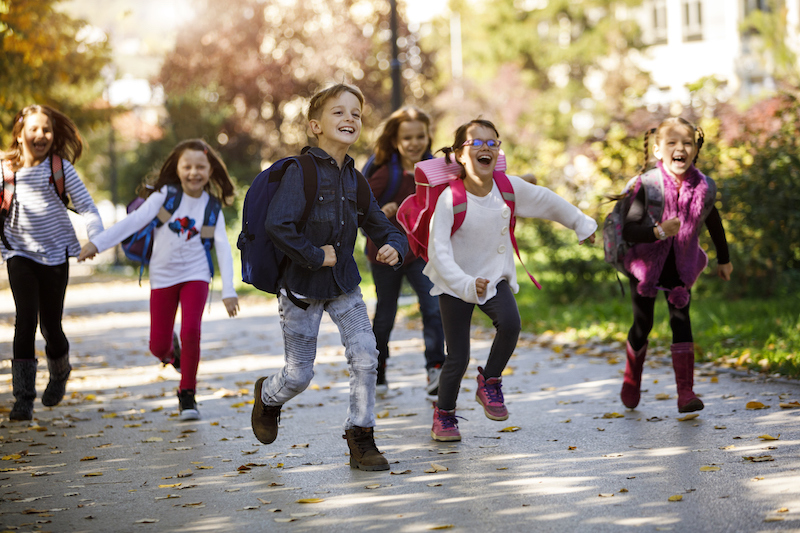 Take learning out of the classroom and onto the sidewalk with this engaging activity. In your school’s neighbourhood, take students out for a walk and write down any numbers you see on traffic signs, houses or billboards.When you get back to the classroom, talk about which numbers are bigger and smaller. Ask students to group number using common factors, including:Use a blank place value chart to analyze the numbers with your students and write them in standard, expanded and word form. 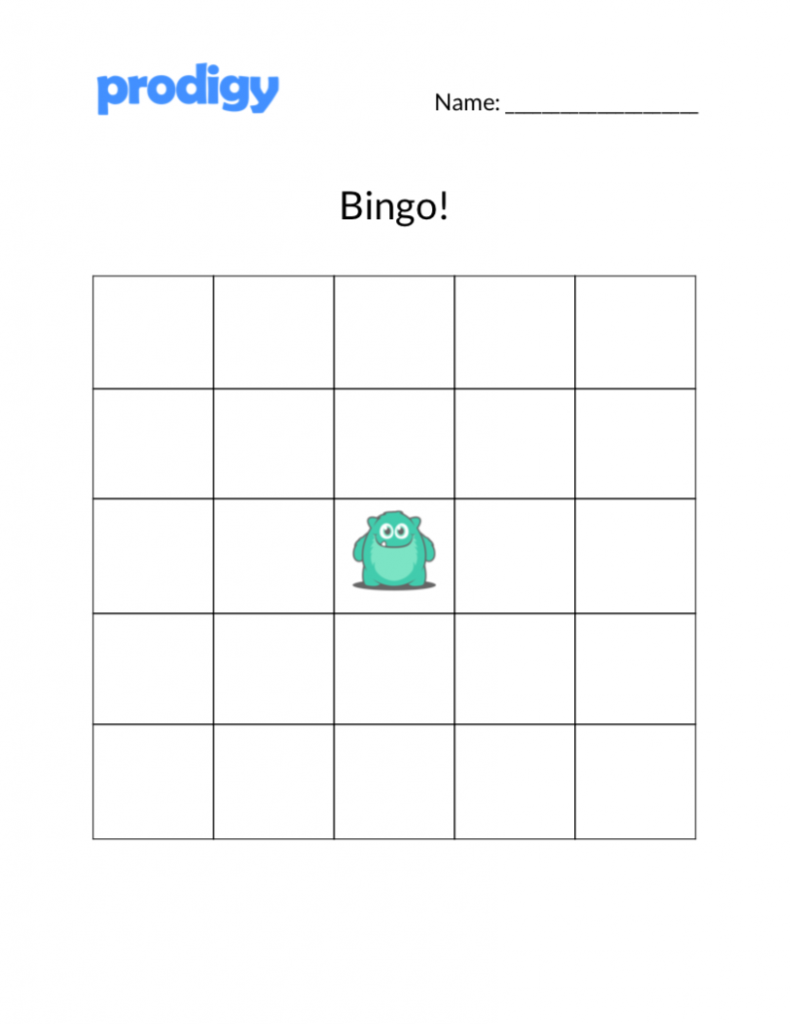 Click to downloadBingo is an easy way to introduce gamification into the math classroom for a number of concepts, including place value.Hand out bingo cards to your students with two-, three- or four-digit numbers in each square. You can also ask students to fill in their bingo cards with numbers and swap sheets with a partner.Call out digits and place value for students using sentences like, “I’m looking for a 5 in the tens place,” or “I’m looking for a number with a 300 in it.” The first student to have a full row, either up, down, across or diagonally, gets to call out the next number.

For millennia, people around the world have used different types of abacuses to calculate addition, subtraction and even more complicated equations that include square roots and fractions.Use a standard abacus with several rows and ten beads on each row. Each level represents a place value, starting at the top with ones, tens, hundreds and thousands going down.Start with smaller number. For 18, students can count out ten beads from the ones column, then move over a bead in the tens column to represent those ten beads. Finally, students can count out eight beads for the ones column. This helps students understand place value as multiples of ten. To make a larger number like 281, students can take two beads from the hundreds row, eight beads from the tens row, and one bead from the ones row.

There’s a good chance your students have already identified money as being one practical application of place value, both for whole numbers and decimals. Money encourages abstract thinking. With whole numbers, students can easily use one, 10 and 100 dollar bills to understand how digits can represent large values.

Students can also learn how to work with decimals using dimes and pennies. Explain that one dime is worth one-tenth of a dollar. Link money back to earlier lessons on decimal place value to help students recognize decimals as parts of the whole numbers they’re used to working with. As a fun activity, divide students into groups and give each one three piles of one dollar bills, ten dollar bills, dimes and pennies. Using a place value chart, students can put the piles in order from least to greatest, and write out the number in standard, expanded and word form. 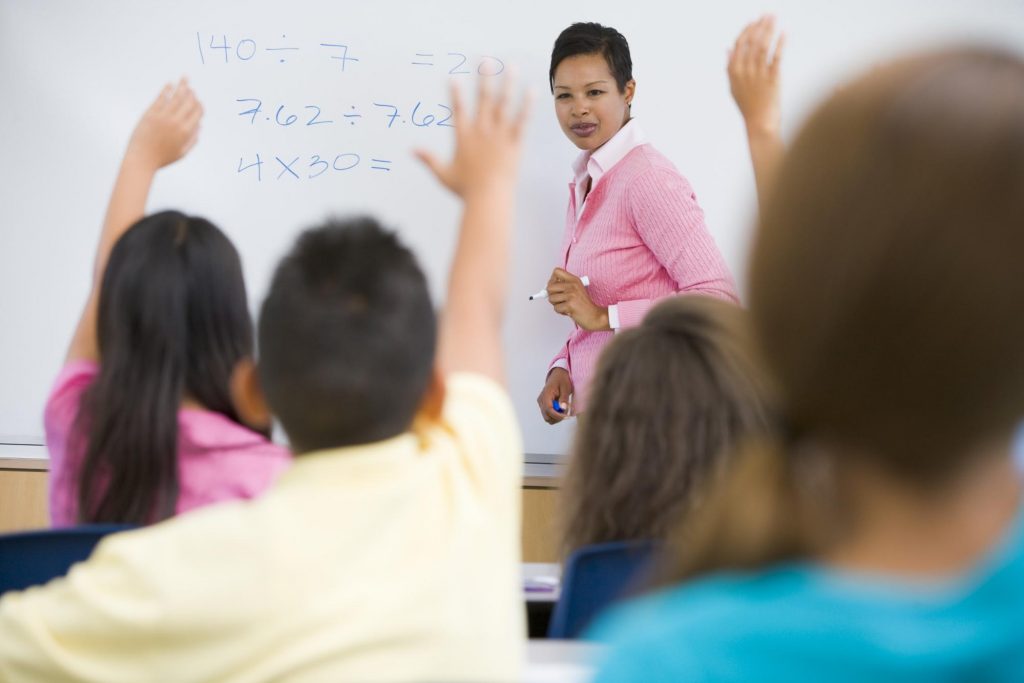 Instead of just writing out numbers on a place value chart, give students the chance to think about place value differently with number stories.Give students a sentence with digits and the place value, but not in the right order. Challenge them to write the number 821 with the clue, “I’m thinking of a number with a one in the ones column, an eight in the hundreds place, and 20.”Once students have the story, they can practice writing the number in expanded, word and standard form. Use a place value chart to help keep larger numbers straight.

Tried and true, manipulatives are an excellent way for hands-on learners to understand more abstract concepts like place value.

There are two types of manipulatives you can use to teach place value:Use what’s most accessible in your classroom to reinforce the concept of place value with your students. After they’ve made the number with manipulatives, students can use a place value chart to write the number in its different forms. 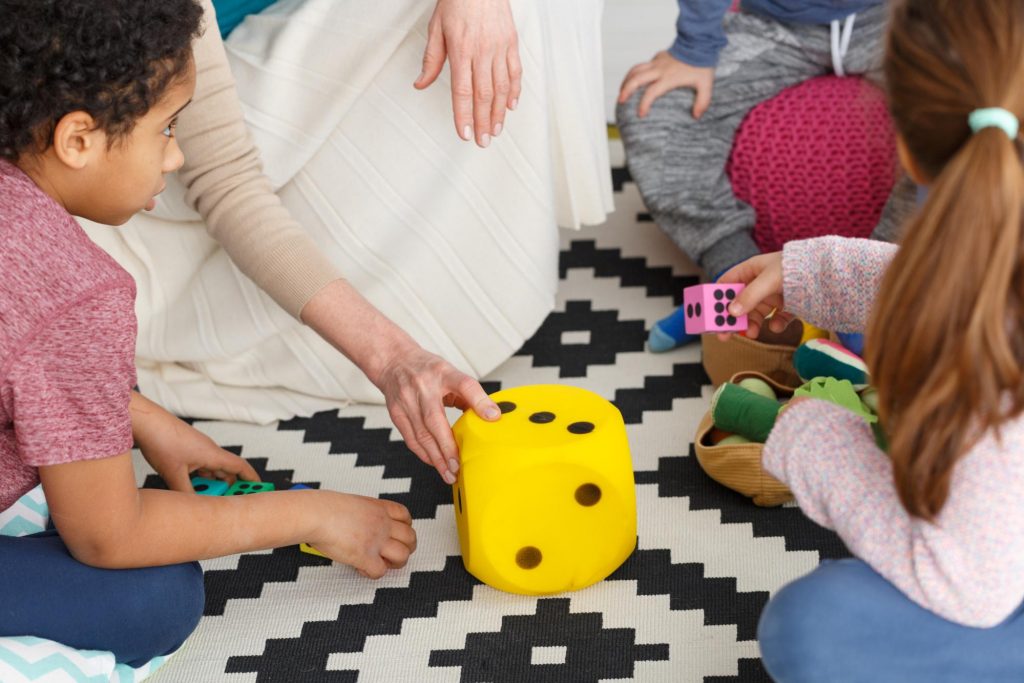 Challenge your students to beat the teacher with this fun classroom game! Write a number on the board and hand out dice to each of your students. Students can roll their dice two or three times and use the digits from each roll to create a number greater than, less than or equal to the number on the board. Manipulating the digits gives students the opportunity to think about building place value and the relationship between numbers. Give the student with the largest, smallest or closest number the chance to write a number on the board themselves. For an added challenge, have students use a place value chart to write out their number in standard, expanded and word form.

When to use a place value chart in your classroom

Place value is a foundational math concepts your students need to understand clearly in order to move on to more difficult units. Use a place value chart in your classroom to run some of the activities above, or as a tool for students to use as they’re completing their work. When students understand how to build bigger and bigger numbers, there’s no limit to what they’ll be able to learn!Prodigy is a no cost, adaptive math platform that's loved by over a million teachers and 50 million students. Log in or sign up today to see what it can do in your classroom! 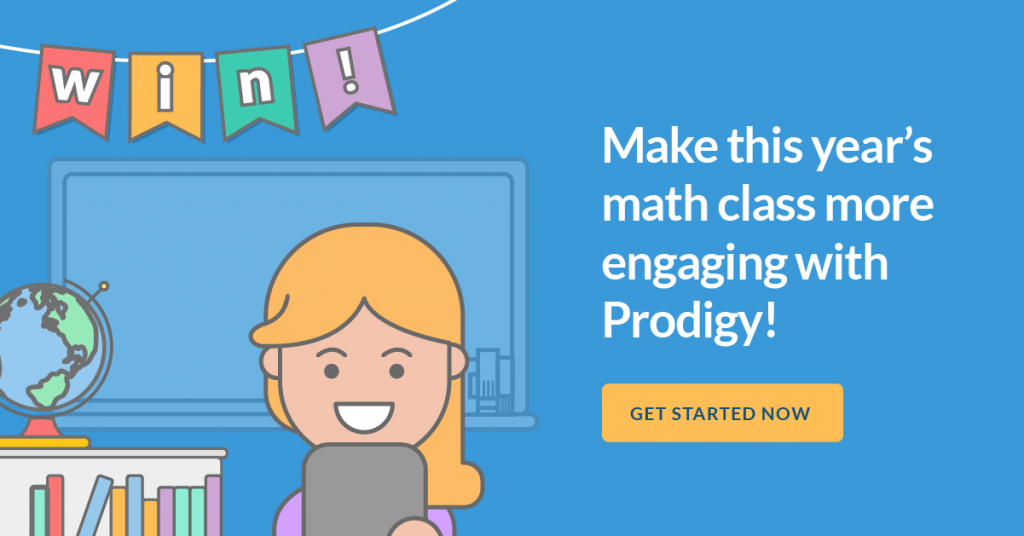